We had a  really fun NOON YEAR’S party last year.  The kids and I made party hats, and noise makers, I set up a balloon drop, and watched the Sprout Channel and followed their countdown to noon year’s.  We had cookies and little plastic party glasses with apple juice.  We toasted each other and took a sip after the new year came in.   It was one of the best parties I have had.  Hanging out with these boys is all I need to have the perfect New Year.  This year I have been trying to figure out an activity for us to celebrate the new year.  It just all of a sudden hit me while doing 100 other things around the house, New Year’s Erupting Volcanoes!  Now to figure out if I could pull it off before baby brother woke up…. I had a short time frame and a million other things to do.  Sometimes I work best under pressure, lol. My oldest was also begging for “something” to do.  I grabbed a few party glasses.  I have to admit the dust on them was crazy,lol.  After washing them we finally had a good reason to put them to use. I started grabbing more supplies and set out to let my son enjoy a little sensory and science play while I ran around the house multi tasking. *confetti or sequins from craftprojectideas.com ( thanks for the freebies) Let the kid or kids tear up bits of streamer to keep them busy a minute.  I added the washed glasses to the tray and filled with baking soda.  I used a spoon and scooped it out of the box and filled the glasses.  I poured in sequins on top of the baking soda.  I then poured vinegar into our beakers.  I mixed a little food coloring into each one.  We added the torn streamers and a  little more sequins, or confetti, to the tray.  Now it was time to play! The kids took the colored vinegar and we did mix a little dish soap in to it.  The soap makes it foam more and the kids love it.  As they poured the vinegar they saw the reaction it makes when it hits the baking soda.  Erupting Volcanoes!  No matter how many times we do this one simple science experiment the kids ALWAYS love it.  I love finding new ways to present it to them. I loved that little brother just went ALL OUT as usual and poured the entire beaker of vinegar in the glass at once.  Big brother was taking his time pouring a little at a time to see the overflow of foam  from the cup.  I love that they are so different and that their personalities show through even when playing. Of course we had to do it one more time.  I must admit I was taking pictures and doing this and that in between.  That is my life, lol.  I would not trade it for anything.  The trays luckily contained the mess.  We usually do this type of thing outside but on a cold, wet day we could not. Big brother thought it was so neat that the different colored vinegar poured over the other color separated and made layers.  Great observation big brother. They continued to mix and pour the baking soda, sequins, vinegar mix.  A simple science experiment turned sensory play. Perfect way to getting excited for the upcoming New Year and play on a rainy day.

more posts to check out! 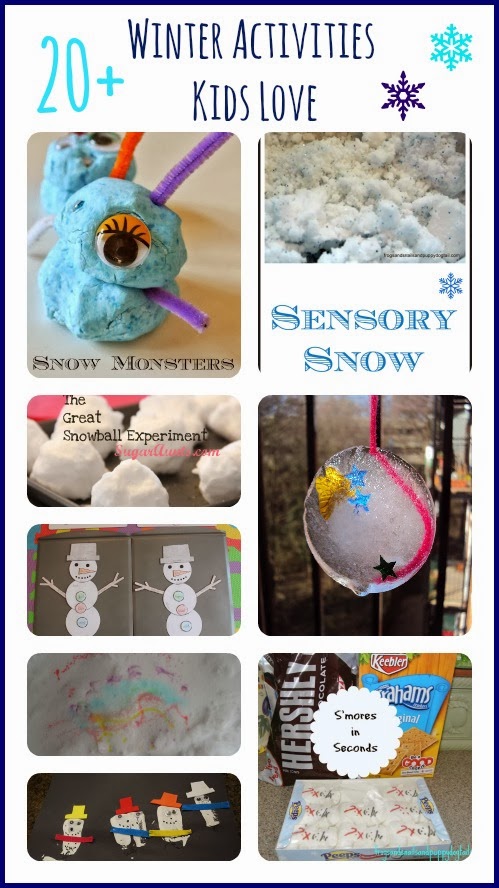